The iCAP 2020, objective 2.3.2 is: “Use at least 150,000 MMBTU/year of clean thermal energy by FY30.” The responsible campus unit for championing this objective is F&S. Progress is tracked in the iCAP Portal project page for Use Clean Thermal Energy.

No metric specified for this objective

As stated in the Introduction, the university owns a best-in-class combined heat and power plant (Abbott Power Plant), a district steam heating system, a district chilled water cooling system with energy storage (the Campus Chilled Water System), and the campus electrical grid. This comprehensive network of energy processes (Figure 13) has served us well; in fact, many cities and campuses around the world are planning to implement district heating and cooling systems to increase energy efficiency. 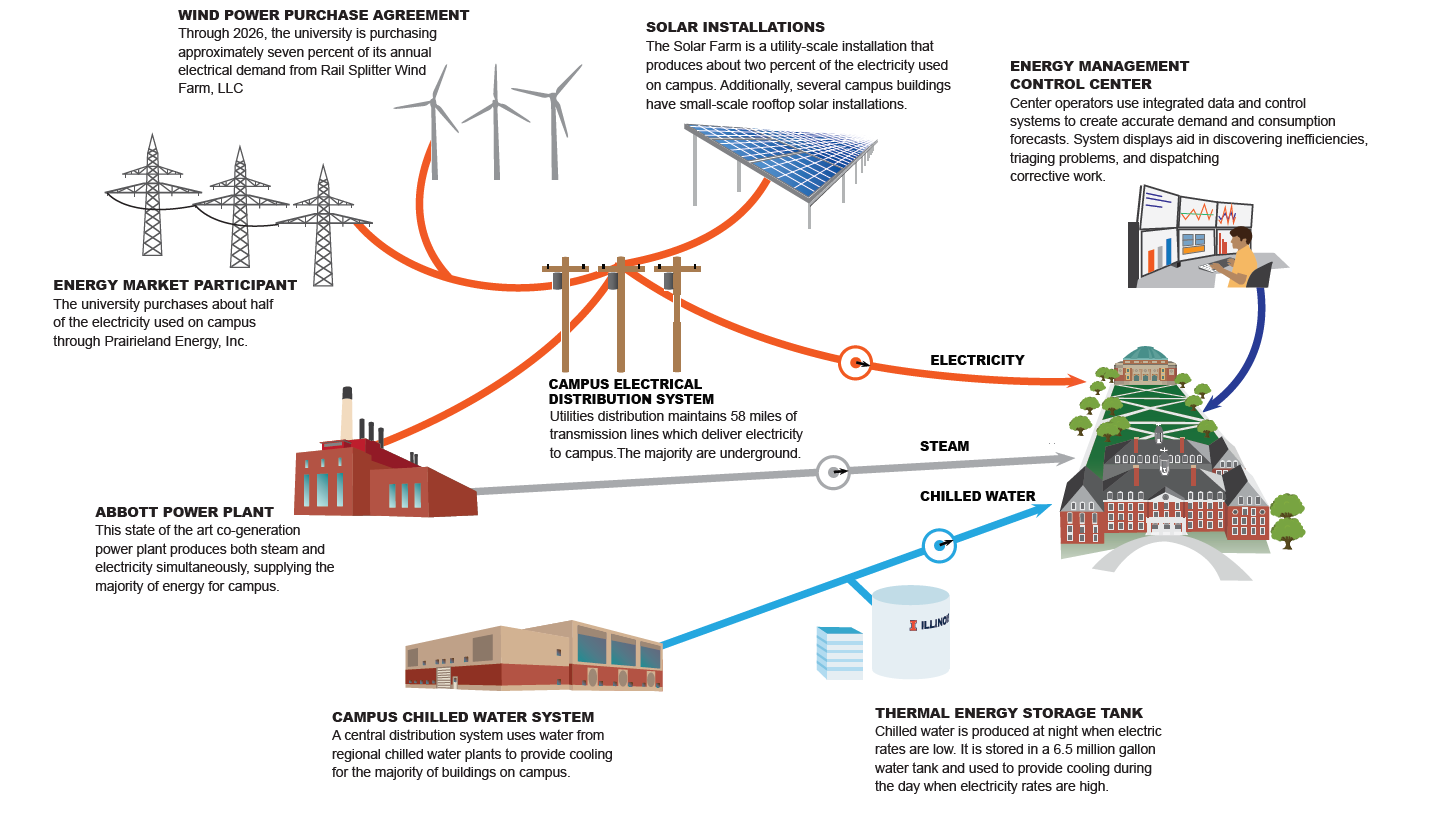 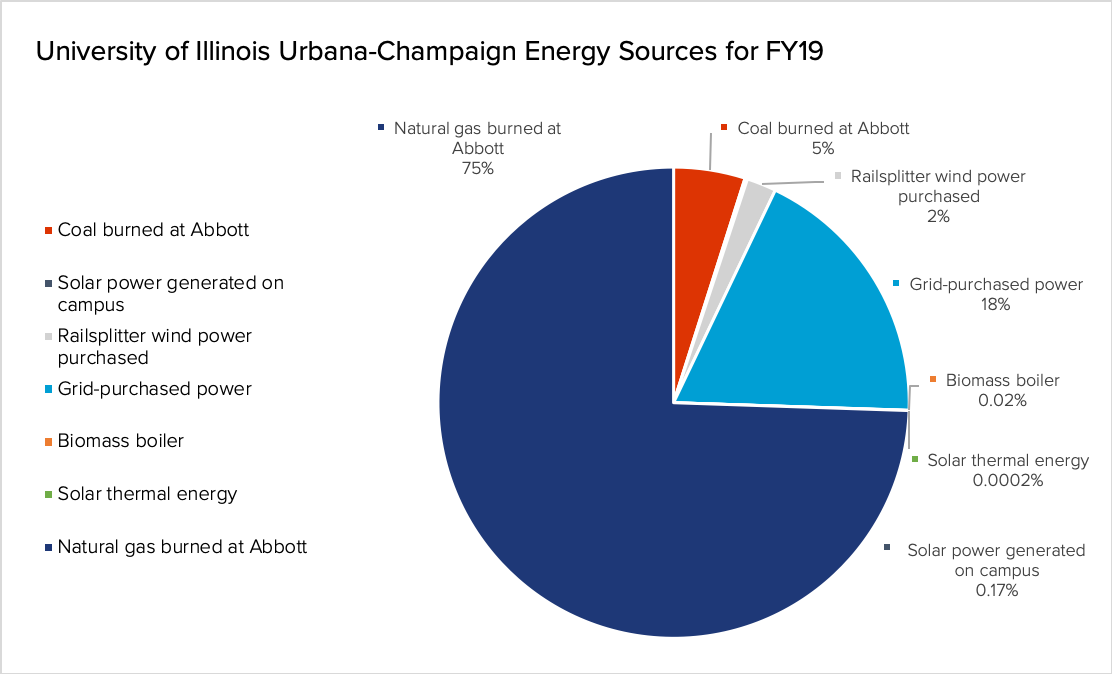 Currently, we burn natural gas and coal to produce the steam needed to heat campus through the district heating system. In keeping with our carbon neutrality goal, F&S has investigated several methods to reduce fossil fuel use at Abbott and subsequently reduce our total emissions. The 2010 iCAP included a plan to “evaluate the potential for: 1) eliminating summer coal use in the near term; 2) eliminating all coal use by 2017; and 3) alternative means of generating and distributing thermal energy (hot water distribution, regeneration, geothermal looping) in the long term.”[2] The resulting study (the Utility Production and Distribution Master Plan[3]) was completed in 2015.

One major change since the FY08 baseline is the university’s shift away from burning coal. The total energy generated as a result of burning coal at Abbott decreased by an impressive 89% from FY08 (1,792,464 MMBTU) to FY19 (203,954 MMBTU). Continued use of coal at Abbott helps meet the campus’s heating demand during the coldest months of the year and supports research on reducing emissions from coal-fired power plants. Illinois is a national leader in the study of carbon capture and carbon storage technology, and F&S is collaborating with researchers at the Illinois Sustainable Technology Center (ISTC) to test carbon capture technology using Abbott as a living lab. [4] ISTC has also used Abbott flue gas in studies related to algal biomass and biofuels. The ability to use coal during the coldest months of the year has enabled Abbott to become nationally recognized as a living lab for research on second-generation carbon capture. F&S is collaborating with the ISTC and the Illinois State Geological Survey on a range of possible breakthroughs that could lead to effective carbon capture worldwide. As a utility that owns its own grid and generation capacity, campus represents an attractive testbed for cutting-edge efforts to eliminate greenhouse gases at commercial scales.

Other options for reducing emissions at Abbott include using geothermal or solar thermal to preheat water before it travels to existing coal or natural gas boilers. F&S collaborated with Illinois Business Consulting to investigate the potential for mixing woody biomass with the coal, but it was determined to be infeasible.[5]

Perhaps the best option for decarbonizing thermal energy on campus is renewable natural gas (RNG). RNG is a drop-in solution that can be generated from a variety of technologies — most notably from upgrading biogas produced from anaerobic digestion — and used in existing infrastructure such as at Abbott Power Plant. Argonne National Laboratory publishes a database of RNG projects[6] divided into the following categories: farms, food waste, landfills, wastewater treatment, and other waste. The Argonne database shows an increase of 53% from 2017 to 2019, and a total 2019 production capability of about 45 million MMBTU. This is a growing opportunity that the university will pursue for clean energy.

Another potential clean energy solution that can be implemented at Abbott is portable Advanced Small Modular Reactors. Faculty research in the Department of Nuclear, Plasma and Radiological Engineering (NPRE) supports the installation of a microreactor to produce steam at Abbott as an alternative to fossil fuels. The university’s high energy demand offers opportunities for interdisciplinary research to reduce campus energy consumption, especially pertaining to steam production. The role of nuclear power in our greater energy system is still uncertain. Illinois faculty members are researching and collaborating with key stakeholders to address potential barriers and strategies to overcome uncertainties. As we work to expand clean energy sources and achieve carbon neutrality, we will continue to study the feasibility of nuclear reactor technology.

In addition to Abbott Power Plant, we are implementing alternative heating and cooling solutions in individual buildings, such as chilled-beams, heat-recovery chillers, energy recovery, and geothermal. The chilled-beam heating and cooling system is incredibly efficient in the Electrical and Computer Engineering Building, and research innovation projects for geothermal energy systems at the Illinois Energy Farm, the Bardeen Quad, and the Ven Te Chow Hydrosystems Laboratory are in progress. In FY20 a building-scale geothermal project was installed at the Campus Instructional Facility, saving 2,839 MMBTU per year.

As clean energy technologies expand and become more viable, we can proactively equip campus buildings to accommodate them. One way to do this is by converting older buildings from steam heating to hot-water, low-temperature systems. Over 170 campus buildings still utilize steam for heating purposes inside the building.

Since 2010, all new campus buildings have been designed and constructed for hot-water heating systems, which require lower temperatures than steam. Similarly, as existing buildings have undergone refurbishment, steam heating systems have been replaced with hot-water systems. Hot-water systems are not only lower-cost to maintain, but are also easier to control, resulting in increased comfort for building occupants. Moving forward, we will continue to require the use of hot-water heating systems for all new construction.

Other key initiatives include converting inefficient HVAC systems to types that are compliant with current energy codes and updating the controls to reflect modern technology. These HVAC and control upgrades should be implemented in tandem with conversion to hot-water systems wherever possible in order to amplify efficiency and drive a better return on those investments. Together, these conversions can move campus buildings toward 100% hot-water heat, position us to use all potential clean energy technologies currently in existence, and contribute significantly to the university’s goal of carbon neutrality by FY50.