To better understand the demand for bicycle infrastructure, programming, and services, as well as to better track the impact of past improvements, regular bicycle counts are recommended for the University to know exactly how many bikes are on campus at any given time throughout each school year.

The University, in partnership with Champaign County Bikes, has conducted two counts. The first count took place on Wednesday, October 23, 2013. The University District was divided into 25 quadrants, and 30 volunteers were assigned a quadrant. From 10AM–11Am, volunteers counted both on- and off-rack bicycles (i.e., bikes locked to lamp posts, fences, railings, the bike itself, etc.). 5,574 bikes were counted, and of those, 17% were found off-rack.

The second census took place on Wednesday, April 23. It was conducted in a similar fashion to the October count, with the same quadrant designations and timing. With only 23 volunteers, some participants conducted counts for multiple quadrants. Volunteers counted 4,739 bikes (11% of which were off-rack).

Bicycle Counts at Armory and Sixth

View details for metric: Bicycle Counts at Armory and Sixth

Bicycle Counts at Green and Goodwin

View details for metric: Bicycle Counts at Green and Goodwin 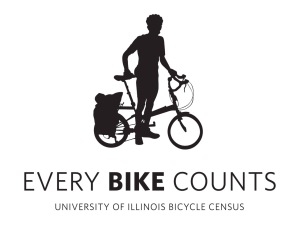