Agrivoltaics: Crop Production and Solar Panels on the Same Land (In Progress)

Global demand for food, energy, and water is increasing, which poses the challenge of how to meet these demands in an environmentally and economically sustainable way. At present, energy production is dominated by carbon-intensive fossil fuels; however, renewable energies are being integrated into the energy sector at an increasing rate. Bioenergy crops reduce dependence on fossil fuels, but the efficiency of crops converting sunlight to stored energy is low — and the water requirements from agronomic and industrial perspectives is high.

This study, supported by iSEE’s proposal development team, investigates a strategy called agrivoltaics, by which crop production and photovoltaics can be merged within a landscape to increase the total energy output toward food and energy production and to do so with less water and in an ecologically and environmentally sustainable manner.

Purpose of the work: Campus Connection

Agrivoltaics can increase the food and energy output per land area while reducing demands for water, based on the ability of solar panels to alter the plant growth environment to increase landscape water use efficiency (WUE) while marginally decreasing crop production but significantly increasing renewable fuel production relative to existing land use.

The Agrivoltaics Team, initiated by iSEE in 2018 — proposes to integrate economic models with an ecosystem model altered to include an agrivoltaic ecosystem. These coupled models will be used to investigate the energy output per land area and impacts on water use and water quality, and to spatially analyze agrivoltaics relative to the current ecosystem across the Midwestern U.S. Additionally, we will address social acceptance and create an outreach plan using the most effective strategies to promote K-12 interest in challenges facing the interface of food, energy, and water resources.

The proposed site for an agrivoltaics study would be the 21-acre Illinois Solar Farm, along the south side of Windsor Road between First Street and the railroad tracks. The Farm, which went online in late Fall 2015, is expected to produce an estimated 7.86 million kilowatt-hours (kWh) annually, or approximately 2% of the FY15 electrical demand for the Urbana campus making this site one of the largest university solar arrays in the country. Research estimates the Solar Farm will generate up to 91% of its original output even in Year 20 of the project.

Solar Farm 2.0 is also expected to be built in the near future on the U of I campus, lending further land for an agrivoltaics study. 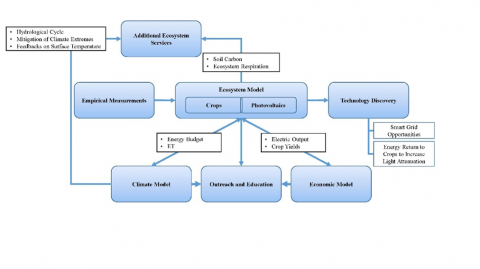