The University of Illinois started lamp recycling in the 1990s through Mercury Waste Solutions (MWS). For several years they used UPS to ship lamps to MWS, but there were many problems with this system, including infrequent pickups from UPS, poor handling care resulting in broken lamps, and high prices.

In 2004, they began collecting lamps and ballasts in Building 244 on campus, the Universal Waste Recycling Center.  Lamps are now recycled through Veolia.

With a few exceptions, departments collect their own dead lamps and call Patty Douglas when they need to be picked up.  Departments pay a fee for this and will be renegotiating their prices in June.  Janitors on campus have received training to collect lamps separately rather than throw them away into dumpsters or trash cans. Waste management staff have also been trained to leave trash alone if they do see a lamp in it. They call Patty and have her come get the lamps for recycling before taking the trash away.

Both lamps and ballasts are collected at the Universal Waste Recycling Center.  Some non-mercury lamps are “treated” (crushed) before shipping for volume reduction; others are packaged in large boxes or metal or fiber barrels.  When enough lamps have been collected, Patty puts in a request to Landon Hill in the Division of Research Safety, and then a date is set with Veolia for them to send a truck to pick up the full containers.

There are a few exceptions to this system, one being the growth chambers in all the green houses on campus. To avoid having outsiders contaminate research areas, they have their own system internally for disposing of dead lamps, which are still recycled. Until very recently, another exception was DIA, which was problematic because the fields, stadium, etc. are huge sources of dead lamps on campus. However, DIA is now working with F&S to make sure all of their lamps are disposed of properly. 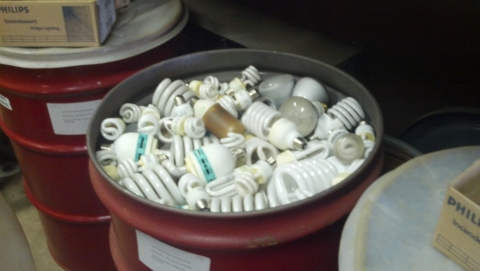